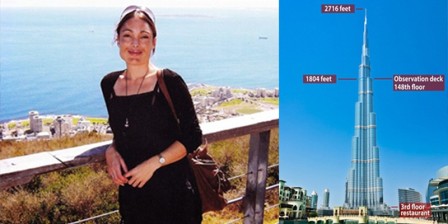 A woman committed suicide by jumping from the 148th floor of the Burj Khalifa, the tallest building in the world.
Laura Vanessa Nunes, 39, took the extreme step after splitting up from her boyfriend, sources said. The incident occurred in November 2014, but it came to light recently, mirror reported.

Nunes' mother Leona Sykes, from South Africa, has received the CCTV footage taken from the deck of the building floor, which apparently shows Ms Nunes slipping through a small gap designed to allow tourists to look out and take photographs. The footage also shows her initially putting her head through the gap before rushing back to the observation deck.

"I think she got a fright when she looked down. She was a panicky, terrified young woman," Mail Online reported, quoting Ms. Sykes.

"She walked back to the pane of glass, turned around and looked up, maybe to get strength or to make a prayer.

"Then she put her head out, tilted her body and slipped through. And nobody noticed."

Commenting on her daughter’s relationship, Ms. Sykes said that Ms. Nunes was besotted with him, but he did not love her much.

Ms. Nunes' body was found on the third floor Amal restaurant, part of the Armani hotel.

Free press to the fore