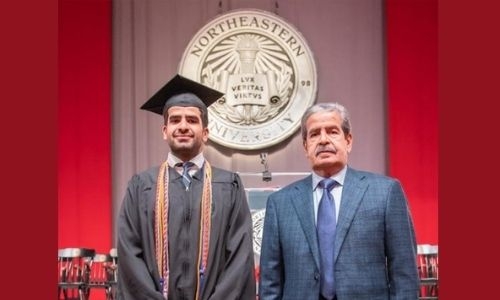 The Deputy Premier commended the efforts exerted by HH Shaikh Khalid bin Ali to obtain his degree from Northeastern University, which is among the prestigious universities in the US, wishing him continued success in his academic and professional career.

On the occasion, HH Shaikh Khalid bin Ali extended sincere thanks and gratitude to HH Shaikh Ali bin Khalifa for his constant fatherly care and support, which contributed to his success in obtaining his degree, pledging that he will always be ready to serve the kingdom.

The Deputy Prime Minister has received congratulations on the occasion and wishes of every success to HH Shaikh Khalid bin Ali in serving the nation, under the leadership of His Majesty King Hamad bin Isa Al Khalifa, and with the support of His Royal Highness Prince Salman bin Hamad Al Khalifa, the Crown Prince and Prime Minister.