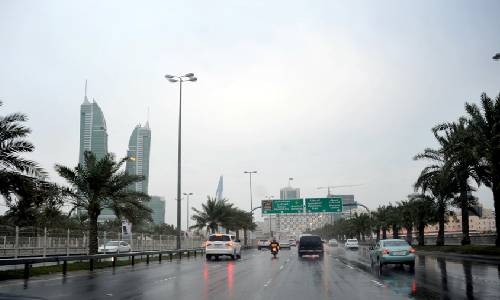 Bahrain will experience scattered rains and windy conditions starting today, thanks to the arrival of El Sarayat. An official source at the Meteorological Department of the Ministry of Transportation and Communications said the Arabian peninsula and the Gulf region are affected annually by rapid weather fluctuations known locally as Al Sarayat.

This weather phenomenon starts at the end of March and continues until mid-May. The rapid flow of air in the upper layer of the atmosphere and high surface temperatures in the Arabian peninsula will contribute to the creation of thunder clouds and dust storms during this period, the source said.

Sarayat season thus causes thunderstorms, where cumulus clouds form a high-strength force. The meteorological department pointed out that the season has already begun and is strengthening remarkably in the northern and central regions of the Arabian Peninsula.

“We expect its impact to be visible in the Kingdom until Saturday, which means scattered rain and dust storms in some areas.” “There are chances for scattered rain, especially on Friday and Saturday, accompanied by gusts. Wind speed could reach 57 kilometres with gusts of up to 78 kilometres per hour.”

“Active northern winds would continue to grow stronger in the coming days, especially on Sunday and Monday. The temperature would hover around 20 degrees Celcius. The Meteorological Department has called on the public, especially sea-goers, to exercise caution during these days.