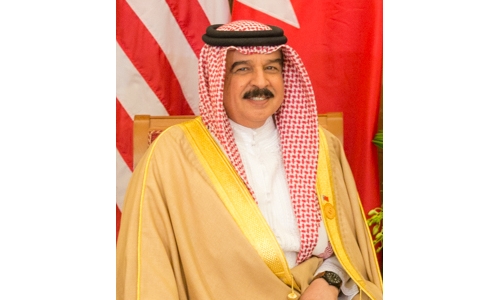 "Heartiest congratulations and most sincere wishes to His Majesty King Hamad bin Isa Al Khalifa of Bahrain on his 72nd birthday!"

HM King Hamad is a symbol of pride for Bahrain and we’re inspired by his wise leadership, aspire for further progress and prosperity. Bahrain is on the path towards continued growth and development under the blessed legacy of our ruler, His Majesty King Hamad bin Isa Al Khalifa, may God protect him.

On Friday, January 28, 2022, Bahrain celebrates the 72nd birthday of HM King Hamad who has been leading a transformational phase in the kingdom's march with well-thought-out efforts.

"It is a great honour for News of Bahrain and The Daily Tribune to express our most sincere wishes of good health and long life to HM King Hamad. We pray to the Almighty Allah to protect His Majesty, grant him good health and continuous blessings. May the Almighty Allah safeguard Bahrain and its people and help Bahrain continue its march towards progress under his wise leadership."

His Majesty King Hamad bin Isa Al Khalifa is the eldest son of the late Amir of Bahrain, Shaikh Isa bin Salman Al Khalifa HM the King was born in Riffa on January 28, 1950, corresponding to Rabe'a Al Awal 7, 1369, on the Hijri calendar.

At the age of six, he began his primary education in Bahrain in addition to reciting the Holy Quran and studying the principles of Islam and the Arabic language at the hands of professionals in the field of Islamic studies.

This education had a positive impact on his mastering of Arabic and his appreciation of Arabic poetry, especially Nabati and Bedouin poetry.

His Majesty was keen to attend the Majlis (open court sessions with the people) of his late father to listen attentively to traditional stories and legends about heroes, nations, incidents and factors that contributed to victory or resulted in defeat.

His Majesty the King also expressed keenness to learn swimming, horse riding and target shooting from expert trainers, which had a major influence in planting the seeds of his interest in sports and his patronage of sportsmen.
In 1964, following the completion of primary education with honours, HM the king has proclaimed Crown Prince on June 27, 1964.

He completed his secondary schooling at Leys public school in Cambridge, England, returning to Bahrain in the summer of 1967.

He joined the Mons Officer Cadet School at Aldershot in England graduating on September 14, 1968.

He also studied at Sandhurst Academy.

On his return, HM the king played an active role in preparing the outline of the Bahrain Defense Force (BDF) which was bolstered by an Amiri Charter issued in August 1968 that created the BDF.

HM was appointed head of the Defense Directorate and became a member of the State Council which was established on January 19, 1970.

He became Minister of Defense on August 15, 1971, when the Cabinet was formed and continued holding the post until the formation of the current Cabinet.

On June 21, 1972, HM the king joined the US Army Command and Staff College at Fort Leavenworth, Kansas, the United States of America.

He attained the National Diploma in military administration on May 31, 1972, from the Industrial College for the Military Forces in Washington.

On June 9, 1973, he graduated with honours from Fort Leavenworth with a degree in leadership.

He was awarded the military honour certificate from the United States of America for his achievements in military affairs since 1968 and his name was enlisted in the college's lieutenant honours list.

After his return from the US, HM the king took an active part in the country's development and expansion process in general and the BDF in particular.

On June 26, 1974, HM the king was appointed deputy to the Head of the Al Khalifa Family Council following an Amiri decree issued in this context.

In January 1978, HM the king ordered the establishment of the Historical Documents Centre which he housed in his Court.

This had a great impact on the development of the Centre, which continued in its work of gathering pictures and documents from various countries, publishing them in the center’s Al Watheqa magazine.

His Majesty’s interest in sports and youth was enhanced by his appointment as President of the Supreme Council of Youth and Sports in 1975 with Amiri decree No 2. HM the King has always shown interest in sports, especially horse riding.

His keen interest in Arabian horses caused him to establish the Amiri stables in June 1977 which was registered in the World Arabian Horses Organization in September 1978.

HM the king has always emphasized the importance of bolstering scientific research and technology, coordinating such activities in the service of Bahrain.

These activities were given a boost with the establishment of the Bahrain Centre for Studies and Research in1981 and his heading of the BSCR.

Since his teenage years, HM the king had shown great interest in aviation and, in October 1977, he began his theoretical and practical training in flying helicopters.

On January 14, 1978, HM the King graduated as a helicopter pilot and from that moment worked relentlessly to establish the Bahrain Amiri Air Force.

HM the king was enlisted as an honorary permanent member in the Helicopters Club, United Kingdom, on January 30, 1979, for his extensive contribution to aviation in the Middle East since 1977.

HM the King has a great interest in preserving heritage and continues to indulge in several sports activities and hobbies including falconry, golf, fishing, tennis and football, but HM primary interest has always been the continuous development and advancement of the Bahrain Defense Force to which he has allocated a great deal of time and effort.

Honours and awards are given to His Majesty King Hamad bin Isa Al Khalifa: