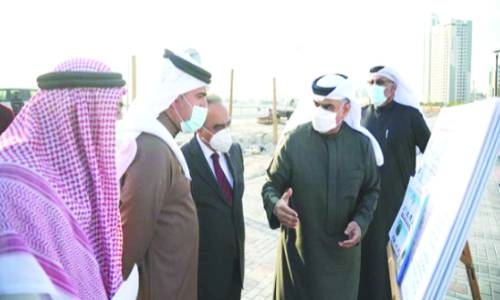 Essam Khalaf, the Minister of Works, Municipalities Affairs and Urban Planning, yesterday held a field visit to review the progress and feedback of various development and service projects ongoing in the Capital Governorate.

The projects are being developed based on approvals from the government headed by His Royal Highness Prince Salman bin Hamad Al Khalifa, the Crown Prince and Prime Minister. The minister stressed the government’s keenness to collect feedback from officials and people to develop the facilities with the highest standards and make maximum use of the available resources.

The minister also pointed out that the project includes solar-powered lighting to save energy and reduce the cost of maintenance and operation. “We also installed shaded chairs and seating as well as planted evergreen trees to increase the green area.”

“The project includes tracks for walking, running and cycling, green spaces, tourist and recreational facilities, restaurants and services.” The project extends between Juffair and King Faisal Corniche over 14 kilometres. He further stressed that the development of Prince Saud Al-Faisal Walkway (Phase III) would kick-start the urban development of the Manama waterfront.

“This project aims to improve the appearance of the landscape and increase the green spaces in the area to reduce pollution and use the empty spaces of the road as safe walkways and bike paths.” The minister said the current walkway has a length of 1.7 kilometres and a width of 4.5 meters.

The total area estimated for the use of bicycles and pedestrians is 7,600 square meters, which will be re-allocated for walking. The minister explained that the effort is to link projects having waterfronts, central parks and public roads to walkways that serve citizens and residents to practice sports.