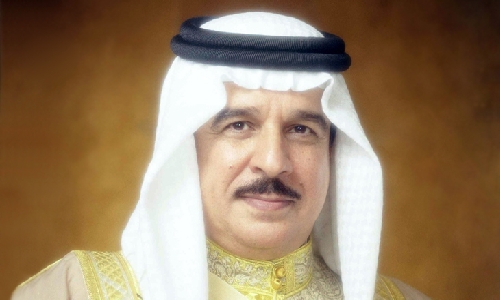 His Majesty King Hamad bin Isa Al Khalifa yesterday expressed pride and appreciation of the achievements of Bahraini diplomacy in its more than 50-year-old history.

“These achievements follow the principles and firm values that shaped Bahrain’s civilised identity that pursues tolerance, coexistence and respect for others,” said HM the King on the occasion of the Diplomatic Day of Bahrain, which falls on January 14th every year.

Bahrain, HM King said, is pleased to express thanks and appreciation for the prominent role played by Bahraini diplomacy at the regional and international levels to build bridges of cooperation and consolidate friendship with brotherly and friendly countries around the world.

“For more than fifty years, Bahraini diplomacy has reflected the foreign policy of Bahrain, which is moderation and balance.”

Bahrain, HM King said, seek to build relations with countries of the world, support the international community to enhance peace and security, address urgent issues and challenges, and achieve Goodness and a decent life for all of humanity.

“What Bahraini diplomacy had achieved through the efforts and giving inside and outside the country is a source of pride,” said His Majesty, adding, “this reflects the loyalty, sincerity and dedication of the people in serving their country, achieving higher interests, defending its positions, and highlighting achievements.

Comprehensive development, HM King said, always constituted our supreme goal, as it affects the life and livelihood of the Bahraini person and the realisation of his aspirations and hopes.

His Majesty congratulated all the diplomats and thanked and appreciated them for their efforts and dedication in performing their responsibilities and tasks entrusted.