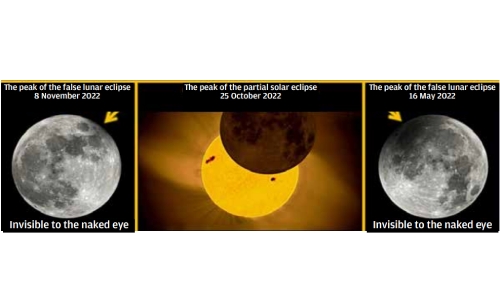 Several rare astronomical phenomena are in store for the people of Bahrain to enjoy in 2022, said a top Bahraini astronomer and researcher.

Ali Al Hajri said several celestial events are lined up for Bahrain next year and the first will be the alignment of four planets -- Venus, Mercury, Saturn and Jupiter-- after sunset in the first seven days of January.

Celebrating this special gathering from space will be the Crescent Moon of the month of Jumada Al Akhirah from the 4th to the 6th of January.

Al Hajri also said that sunset in Bahrain would align with Qibla, the direction towards the Kaaba in the Sacred Mosque in Mecca, from the 8th to 13th January at around 6 pm.

It will occur at an angle of 246 degrees from the north side of the horizon.

“This annual phenomenon will be repeated from the 28th of November 2022 to the 3rd of December during fall at 4.45 pm.”

The percentage of the Moon entering the penumbra of Earth will be 17.28%.

The last eclipse will be on the 8th of November 2022 and will last for about six minutes at Moonrise.

The percentage of the Moon entering the semi-shadow of the Earth will be 0.14%.

Al-Hajri added, “A four-way conjunction of the Moon will occur during the month of Sha’ban at dawn with Saturn, Venus and Mars on the 28th of next March towards the east and before sunrise.”

“The difference in diameter of the Moon and the Sun at apogee and perihelion can be observed by photographing them with the same equipment and comparing them with computer programmes,” he added.

A season to thrive