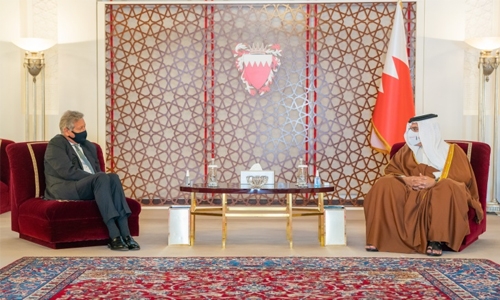 Bahrain is committed to supporting international efforts that enhance development, security and stability. His Royal Highness Prince Salman bin Hamad Al Khalifa, the Crown Prince and Prime Minister said that international partnerships have proven effective in addressing global challenges and are a cornerstone for consolidating the foundations of global peace and security.

HRH the Crown Prince and Prime Minister were speaking as he received yesterday the Director-General and Chief Executive Officer of the International Institute for Strategic Studies (IISS), Dr John Chipman, at Riffa Palace.

His Royal Highness highlighted the cooperation between the Kingdom and the IISS, noting the latter’s success in organising the regional security forum “Manama Dialogue”, the seventeenth edition of which was recently held in Bahrain.

He said that the forum is an influential global platform that facilitates communication channels and the exchange of ideas on issues of regional and global security and stability.

HRH the Crown Prince and Prime Minister highlighted the importance of research studies as a base on which international strategies and efforts to strengthen security and stability can be built, noting the role played by the IISS in this aspect.

Dr Chipman expressed his gratitude for the opportunity to meet with HRH the Crown Prince and Prime Minister, noting HRH’s commitment to strengthening cooperation between Bahrain and the IISS.

Dr Chipman also expressed his thanks to the Kingdom for hosting the seventeenth edition of the “Manama Dialogue”.