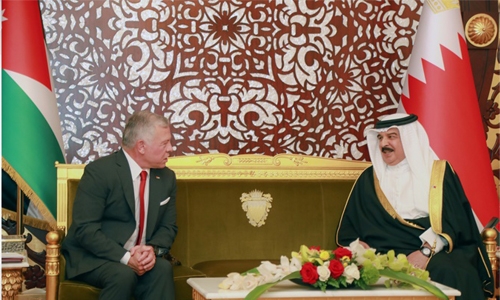 The Kingdom of Bahrain and Jordan affirmed their solidarity and joint efforts in fighting terrorism and safeguarding security and stability.

HM the King welcomed HM King Abdullah, who was accompanied by Her Majesty Queen Rania Al Abdullah, upon arrival at the Sakhir Airbase on a visit to the kingdom.

HM King Hamad expressed thanks and appreciation to HM King Abdulla for Jordan’s supportive stances towards Bahrain in combating terrorism and extremism, praising the two countries’ coordination in countering the scourge of terrorism.

They also underlined the importance of enhancing bilateral cooperation in fighting the coronavirus (COVID-19) and preventing its spread.

HM the King expressed thanks to Jordan for the facilities it had provided to the Bahraini Embassy in Amman to ensure easy procedures for Bahraini citizens and students while returning home. He commended the contributions of the Jordanian community to the kingdom’s development process across various fields.