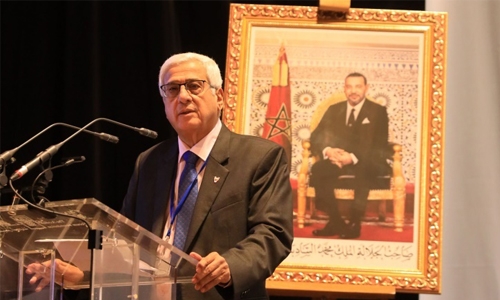 Today's transformations across the world are no longer purely military or political, but extend to the economy, society and the media, Advisor to HM the King for Media Nabeel bin Yaqoub Al Hamer has said.

He attributed the major developments that have changed the face of the world to the COVID-19 pandemic.

Speaking on Arabs and the new regional and international transformation at Assilah Forum, Al Hamer said that despite the Arab world's internal wars, fratricidal fighting, external invasion, regional and international tampering, and repeated daily attacks on Arab countries, there are at the same time seeds for positive Arab transformations and signs of a breakthrough in the situation.

"Arabs have become better aware and aware of the conspiracies being hatched more attached to their Arabism," he said.

In his speech, Al Hamer recalled the most prominent stages through which the pan-Arab nationalist trend has passed since the beginning of the century until the present day.

"It is a long history of crystallization and of the pan-Arab dream," he said.

Al Hamer called for clinging fiercely to hope despite the bleak picture of the current situation.

The Arab League faces a major task in bringing the views of Arab countries closer, finding common ground and major denominators among them on which the Arab parties should meet and participate in the construction efforts for a better future for the region and its people, he said.

Al Hamer said that the way the world's most powerful military force withdrew from Afghanistan after a long war is a major transformation that places the Arabs in front of increasing challenges.

He called for serious reflection on the current Arab situation and for the need to come up with forward-looking visions that address the roots of problems and crises in the Arab World.