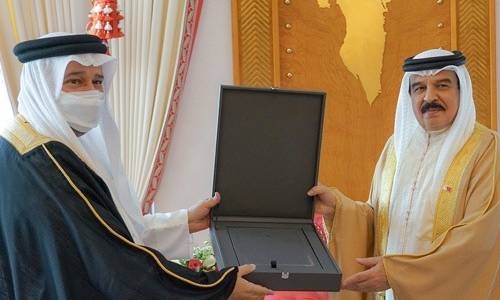 His Majesty King Hamad bin Isa Al Khalifa has hailed the efforts exerted by the National Audit Office (NAO) head and staff to protect public money, optimise the use of all resources and ensure sound spending in compliance with the highest standards of integrity and transparency. This came as HM the King received yesterday, at Al Sakhir Palace, NAO President Shaikh Ahmed bin Mohammed Al Khalifa, who submitted the 12th NAO Report (2020/2021).

His Majesty lauded the NAOled role in assuming its duties and maintaining its independent work which contributes in enhancing the performance of ministries and government bodies.

Shaikh Ahmed highlighted the office’s achievements since its inception thanks to the directives and royal care of HM the King.

He updated HM the King on the NAO future development projects and plans to expand control services, including digital shifts, efficient use of technology and investigative auditing.

The NAO head pointed out that the body’s oversight work included various economic, social, service, health and environmental sectors, in addition to conducting oversight tasks on strategic and important topics in light of the developments of the coronavirus pandemic (COVID-19).

Thanks and gratitude His Majesty King Hamad also received yesterday a number of citizens from the Northern Governorate.

They greeted HM the King and expressed deepest thanks and gratitude for the royal care and directives to set up major development, service and housing projects in the Northern Governorate.

His Majesty welcomed them all, commending the Northern Governorate citizens’ dedicated efforts to build the nation and active development contributions.

He expressed his delight at holding such meetings which embody amity and loyalty and stem from authentic Arab traditions and Bahrain heritage which binds all people as a closely-knit family.

Bahrain, HM the King said, has always been known, down its longstanding history, as a beacon of civilisation, moeration, humanitarian role and openness to the world.

Dr Abdulla Mansour Al Radhi and Jihane Mohammed recited two poems before HM the King, who thanked them for their contributions on national occasions.

Last day today for Filipinos to register for overseas voting