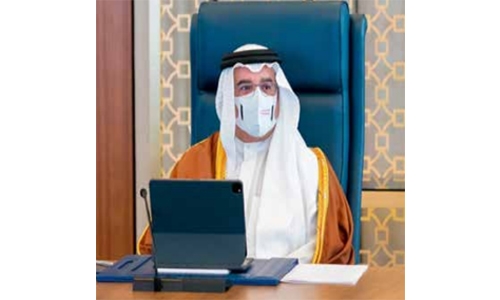 It asserted the importance of strengthening the legal and legislative mechanisms that combat money laundering and the financing of terrorism.

In this regard, the Cabinet welcomed the Basel Anti-Money Laundering Index’s finding, which ranks Bahrain as the first in the Arab region.

The Cabinet welcomed the outcomes of the visit made by His Majesty King Hamad to Egypt, which included a meeting with President Abdel Fattah Al Sisi.

The Cabinet approved the following memorandums:

1. A memorandum by the Civil Service Council regarding the restructuring of several government agencies to improve efficiency and performance.

2. A memorandum by the Ministerial Committee for Legal and Legislative Affairs regarding three draft decree-laws that are part of a development package to improve legislation.

3. A memorandum by the Ministerial Committee for Legal and Legislative Affairs ratifying the Arab Customs Cooperation Agreement, which aims to enhance cooperation between Arab customs administrations and further strengthen coordination in the economic and trade fields.

4. A memorandum by the Ministerial Committee for Legal and Legislative Affairs regarding a draft law approving the “legal” system amending some provisions of the unified customs legal system for GCC countries.

5. A memorandum by the Ministerial Committee for Legal and Legislative Affairs regarding a draft decision to amend some provisions of the executive regulations of the Civil Service Law.