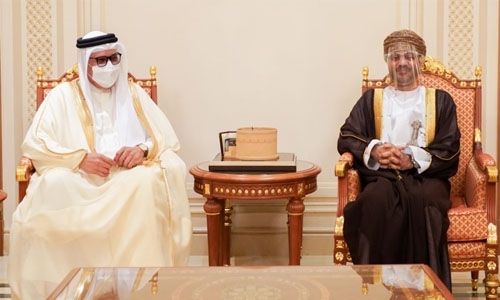 The letter was delivered by Foreign Affairs Minister Dr Abdullatif bin Rashid Al Zayani to the Deputy Prime Minister for International Relations and Cooperation Affairs and Special Representative of His Majesty the Sultan, His Highness Sayyid Asaad bin Tariq Al Said, who received the Minister of Foreign Affairs here yesterday.

During the meeting, the two sides reviewed the strong historical ties between the Kingdom of Bahrain and the Sultanate of Oman and the development they are witnessing in various fields, as well as means of enhancing bilateral cooperation to achieve common interests of both countries and peoples.

The meeting was attended by the Minister of Foreign Affairs of Oman, Sayyid Badr bin Hamad bin Hamood Albusaidi, and the Ambassador of Bahrain in Muscat, Dr Juma’a Ahmed Al Ka’abi.