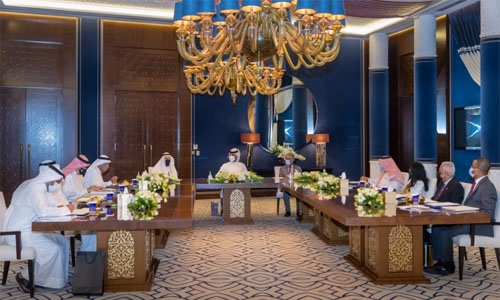 His Majesty King Hamad bin Isa Al Khalifa’s directives, support and continuous interest in the humanitarian work has been praised.

HM the King’s Representative for Humanitarian Work and Youth Affairs His Highness Shaikh Nasser bin Hamad Al Khalifa also lauded HM the King’s great care for orphans, widows and all needy groups in Bahrain to provide a decent life for all.

Royal Humanitarian Foundation is carrying out the directives of His Majesty, Honorary President of RHF.

Chairing the RHF meeting, HH Shaikh Nasser expressed gratitude to HM King for his strong support to the foundation and its activities, commending his humanitarian role and compassionate acts for brotherly and friendly countries and peoples.

They reflect the firm and clear positions of Bahrain, leadership, government and people towards brothers and friends in various countries, he added.

The latest such act was HM’s directives to provide urgent humanitarian relief aid to Afghanistan, to help the Afghan people and stand with them during their challenging conditions.

This is part of HM’s endeavours to consolidate international solidarity and based on the fraternal and human ties that bind Bahrain with the various peoples of the world, HH Shaikh Nasser said, as he prayed for peace and prosperity in Afghanistan and the world.