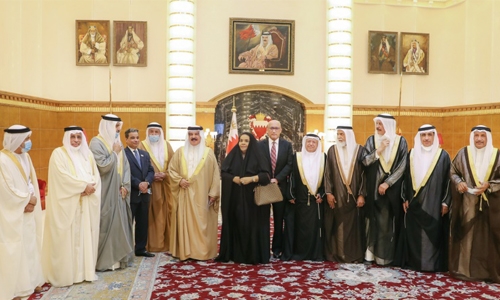 Muharraq citizens expressed deep thanks and gratitude to His Majesty King Hamad bin Isa Al Khalifa for the housing projects, educational and health milestones as well as developed services in the governorate.

This came as HM the King received them yesterday at Al Sakhir Palace.

His Majesty welcomed them, noting that the Kingdom of Bahrain has succeeded historically in overcoming all challenges thanks to its people’s cohesion and solidarity.

He took pride in citizens’ role in supporting wide-ranging development, contributions to the history of national work as well as their participation that reflect their patriotism and loyalty to their country.

Muharraq Governor conveyed to HM the King the citizens’ greetings and loyalty. The delegation of citizens from Muharraq reiterated deepest gratitude to HM the King, affirming their allegiance to the nation and its leaders.

They prayed to Allah the Almighty to protect HM the King and bless him with good health and wellness, wishing Bahrain further development and progress.

He hailed citizens and residents’ response to the mandatory precautionary measures set by the National Medical Taskforce for Combating (COVID-19), which reflects their fraternal solidarity and cohesion that enabled the Kingdom to achieve great success.

HM the King said that Bahrain has dispatched relief aid shipments in support of the Afghan people, praising all efforts supporting this humanitarian drive.

He stressed Bahrain’s constant endeavour to promote love and goodness between all peoples worldwide, noting the importance of such meetings with citizens, which reflect authentic Bahraini and Arab values and affirm citizens’ cohesion and solidarity to serve the homeland and further its progress and prosperity.