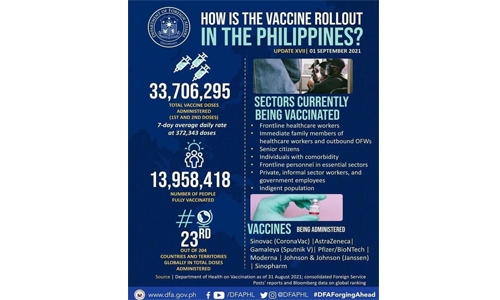 The Philippine Embassy has been regularly updating Filipinos residing and working in the Kingdom of Bahrain on the coronavirus (COVID-19) vaccine rollout back home.

To date, the total number of first and second vaccine doses administered in the Philippines has reached more than 33.70 million. There are now 13.95 million people who have been fully vaccinated from the virus.

COVID-19 vaccination in the Philippines started in March 2021 and the country aims to vaccinate 58 million people by the end of the year.

Through its official Facebook account, the Embassy also provides the guides to be followed by Bahrain-based Filipinos to reduce inconvenience they encounter going home. Under existing protocol, returning Filipinos from overseas are subjected to 10-day facility quarantine.

Meanwhile, the Foreign Affairs Department, under Secretary Teodoro Locsin Jr, is currently working rigorously on the ongoing repatriation of Filipinos from various countries, including those here in Bahrain, in what would go down as the biggest in Philippine history as an offshoot of the pandemic.

The department is coordinating closely with concerned government agencies such as the Embassy, Overseas Workers Welfare Administration (OWWA), and Department of Tourism, among others, in the implementation of the massive repatriation programme. For the record, the last mass repatriation of this magnitude took place in 1991 when 20,000 to 30,000 Filipinos were brought home from Iraq, Kuwait, Saudi Arabia, Bahrain and other Middle Eastern countries during the first Gulf War.