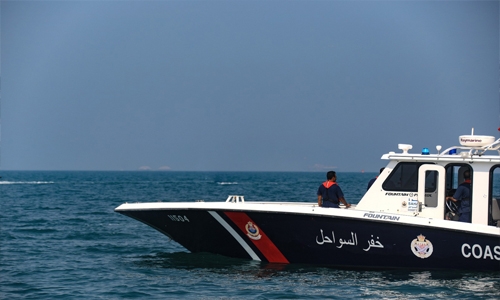 An illegal shrimp fishing boat barged into a patrol vessel, killing a policeman and injuring several others, yesterday as it attempted to avoid inspection by Bahraini Coast Guards.

The incident occurred early morning yesterday when the Coast Guard crew noticed a boat sailing along a suspicious course in Bahraini waters. The crew contacted the boat and ordered them to stop, but the suspects made no response and continued their course.

“When required to comply with the instruction, the boat changed its course without warning and rammed into the patrol vessel in an attempt to escape,” said the Interior Ministry in a statement.

The impact, the ministry said, resulted in the martyrdom of a policeman and injuring two Coast Guard officers. “A policeman died and two injured when a boat crashed into a marine patrol while attempting to escape,” the Interior Ministry tweeted.

The injured coast guard officers were transferred to a nearby hospital by the national ambulance crew. The suspects then fled the scene and continued to the coast of Shahrakan.

Coast guard officials later said they were intercepted and took into custody. The Coast Guard Command announced arresting four men, all Asians by nationality, on the boat, from Shahrakan.

Investigators also found several other violations. Officers said the registration and licence were for other purposes and not meant for shrimping.

The crew, investigators said, also failed to switch on the automated identification device of the boat.

Interior Ministry said the coast guard patrol officers were on a mission to catch violators of the shrimp fishing ban in force in the Kingdom when the attack occurred. The annual six- month shrimp-catching ban came into effect in February this year. The decision is also in line with a GCC wide decision to protect fish stocks.

Accordingly, it is forbidden to catch shrimp in the territorial waters of Bahrain from February 1 to July 31 each year.