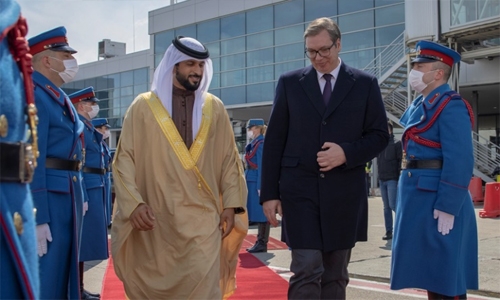 During Shaikh Nasser’s visit, the distinguished relations between the two countries, and ways to bolster bilateral and coordination across various fields were reviewed, in line with the keenness of HM King Hamad and His Royal Highness Prince Salman bin Hamad Al Khalifa, the Crown Prince and Prime Minister, to strengthen ties between the two friendly countries.

Vucic, and a number of senior officials.

“I was honored to be deputised by HM the King to lead the kingdom’s high-level delegation as HM the King’s Envoy and Representative during the visit,” said Shaikh Nasser.

He noted that the solid relations between the two countries prove the keenness of HM King Hamad and HRH Crown Prince and Prime Minister to strengthen Bahrain’s relations with various countries.

Shaikh Nasser left Belgrade, wrapping up his official visit to Serbia. He was seen off by the Serbian President and a number of senior officials.

His Highness expressed thanks and appreciation to the Serbian President for the warm welcome and hospitality accorded to the Bahraini delegation throughout the visit, stressing the importance of ex- changed visits in strengthen- ing relations between the two countries for their common interests. He wished Serbia further progress and prosperity.