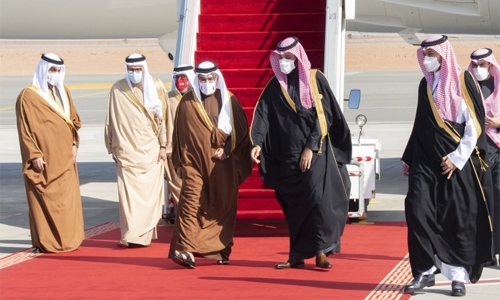 His Royal Highness Prince Salman bin Hamad Al Khalifa, the Crown Prince and Prime Minister, today arrived in the Kingdom of Saudi Arabia, to lead the Kingdom of Bahrain’s delegation to the 41st Gulf Cooperation Council (GCC) Summit, on behalf of His Majesty King Hamad bin Isa Al Khalifa. The summit will be held in the Al-Ula Governorate.

Upon his arrival, His Royal Highness Prince Salman bin Hamad Al Khalifa, the Crown Prince and Prime Minister, made the following statement:

“It is our pleasure to arrive in the Kingdom of Saudi Arabia, on behalf of His Majesty King Hamad bin Isa Al Khalifa, to participate in the 41st Gulf Cooperation Council Summit meeting and we express our deepest thanks to the Custodian of the Two Holy Mosques, King Salman bin Abdulaziz Al Saud, for his keenness to enhance joint cooperation. We express our pride in the growing level of close historical relations between the Kingdom of Bahrain and the Kingdom of Saudi Arabia, based on solid foundations and a shared destiny which continues to contribute to opening wider horizons towards achieving further, shared aspirations.