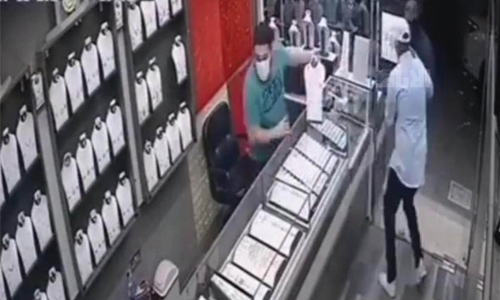 Swift police action foiled the attempts of two men from enjoying the spoils of their robbery. The incident took place in East Riffa, when two men, aged 30 and 60, were involved in looting a gold store of BD3,000 worth jewellery. According to the Director-General of the Southern Governorate Police, one of the two men stole the gold jewellery while the other person ‘hid’ them. As soon as the shopkeeper informed the police about the theft, a team of officers quickly went into action.

They were able to nab the suspects within 24 hours of the crime happening, after identifying one of them from video footages. Upon investigation it was found that the suspect who actually executed the crime had used a stolen bus to commit it. He then confessed to the police that the booty was sold to another man, whom was arrested for ‘hiding’ it. The Director-General of the Southern Governorate Police Department confirmed that all of the stolen items were retrieved from the suspects who are now facing legal action by the Public Prosecution.