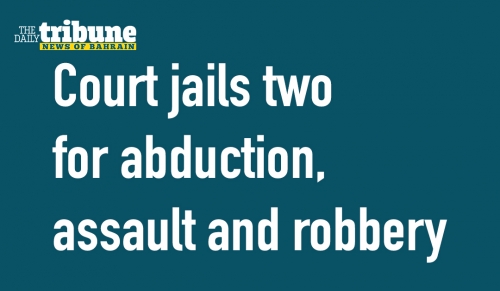 A Bahraini court jailed two expatriate men to three years for abducting, assaulting, and stealing from an expatriate man. The Fourth High Criminal Court also ordered to deport the convicts, after completion of their prison terms.

The police had charge-sheeted the suspects for abduction and assault based on information provided by the victim, who remained hospitalized for 20 days with injuries all over his body following the attack. Court files say the attackers came in a white jeep and demanded the victim to show his identity card, introducing them as police officers.

Public Prosecution told the court that the accused and the co-accused transported the victim in their vehicle and left him near a hotel, after forcefully taking his mobile phone and money in the wallet. The attack was so intense that the victim was left bedridden in a hospital for more than 20 days with multiple injuries and attack marks all over his body.