‘A brave, exceptional step’ | THE DAILY TRIBUNE | KINGDOM OF BAHRAIN 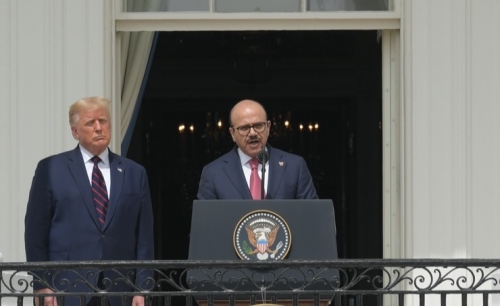 The declaration supporting peace signed by Bahrain with Israel is a historic move towards establishing peace in the Middle East, and a brave exceptional step to enhancing regional security and stability, while preserving the legitimate rights of the brotherly Palestinian people, Foreign Affairs Minister Dr Abdullatif bin Rashid Al Zayani has said.

The Foreign Minister praised the vision of His Majesty King Hamad bin Isa Al Khalifa on ending the Palestinian-Israeli conflict, in accordance with the two-state solution, which the Kingdom affirms its commitment to as one of the pillars of its foreign policy.

“We appreciate the historic roles played by US President Donald Trump and Israeli Prime Minister Benjamin Netanyahu, noting that they are strategic roles that would contribute to maintaining international peace and security,” said Dr Al Zayani.

The Foreign Minister stated that this historic step emanates from the long legacy of the cohesive society of Bahrain, where all religions have co-existed side by side since ancient times. He affirmed that the Kingdom would remain a cradle and home for peace and harmony as it used to be throughout history, where Jewish citizens make an authentic and active component of the local society.

Dr Al Zayani stressed the importance of co-existence as one of the fundamentals of the Kingdom’s policy, and renewed Bahrain’s commitment to the principle of good neighbourliness with all regional countries, without exception, for a stable and prosperous future in the Arabian Gulf, the Middle East, and the world.

“The Kingdom of Bahrain looks forward to the declaration supporting peace leading to the establishment of relations with Israel in various fields, based on the principles of international relations, foremost among which are mutual respect and common interests,” said Dr Al Zayani.

Committed The Foreign Minister reaffirmed Bahrain’s commitment to its national responsibilities towards the GCC, the Arab League, and all brothers and partners from Arab and Islamic countries, as well as its policy aimed to bring peace and stability to the region.

He expressed his sincere congratulations to the government and people of the sisterly UAE on the occasion of the signing of the joint peace accord with Israel, hoping that these strategic agreements would enhance peace, security, and stability.

Dr Al Zayani participated in the signing ceremony of the declaration of support for peace between Bahrain and Israel, and the signing of the peace accord between the UAE, the US and Israel, held Tuesday at the White House in Washington. US President Trump, UAE Foreign Affairs and International Cooperation Minister Sheikh Abdullah bin Zayed Al Nahyan, and Prime Minister Netanyahu were the others to sign the agreements.