HM the King: peace is a strategic option for Bahrain | THE DAILY TRIBUNE | KINGDOM OF BAHRAIN 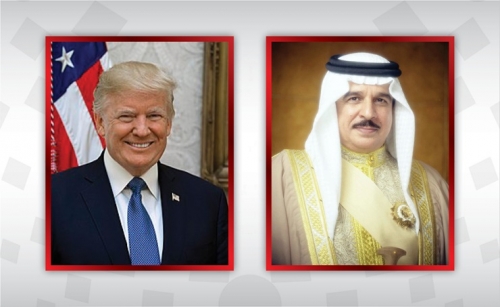 His Majesty King Hamad bin Isa Al Khalifa was congratulated by US President Donald Trump on the signing of the Peace Declaration between Bahrain and Israel. President Trump expressed his thanks and appreciation to HM the King and hailed Bahrain’s efforts to reach the agreement.

In a phone call to HM the King, President Trump praised Bahrain’s peace path, which will encourage all to engage in the peace process, thus ensuring security, stability, and prosperity for all countries and peoples in the region.

HM the King said that peace represents a strategic option for Bahrain and stressed the Kingdom’s vision, which advocates understanding, dialogue, cooperation, co-existence and rapprochement between all peoples and cultures, beyond all tensions. HM the King thanked the US President, commended his efforts to broker these agreements and push the peace momentum forward in the Middle East towards a more prosperous and stable future.