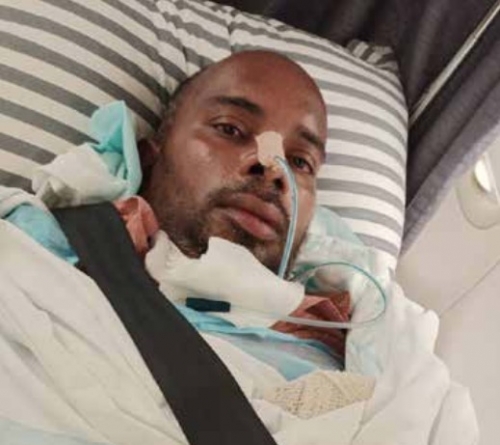 A paralysed man’s dream to fly home just got realised

Never-ending bouts with mishaps. Ajay Jonepally’s past four months in Bahrain can be summarised thus. The last one caught him by surprise and plunged him into deep anguish. The ailment that started with blood pressure and then a brain haemorrhage finally left him paralysed and bedridden.

He was preparing to get back to his home in India for further treatment, as advised by BDF hospital doctors, but then the Corona struck, paralysing the world along with his home dreams. All this put him in a tight spot regarding medical bills, nursing and other expenses.

If not for the generous support of his sponsor, who had come forward to shoulder the expenses, it would have been a total disaster. Adversities were parading one after another in the life of Jonepally, who has been with Al Ameri Electrical Contracting Company for the past four years. Amidst all this pain, he now at least have one reason to smile.

He will be soon back with his loved ones back home in Hyderabad to continue his life’s battle. Given wings to his home dreams are some good minds at the Indian Club. Joining hand with the club in this initiate is Gulf Air and Al-Hilal hospital. Despite procuring all necessary medical clearance, what derailed his flying plan in the first attempt was the absence of a nurse to assist him in the travel.

That too is cleared now with Jijo John an NHRA nurse, who had come forward voluntarily to accompany him to Hyderabad. Jijo John will return in the same flight after handing over Ajay to the medical team at Hyderabad airport. Indian club has reserved nine seats to keep Ajay’s on his stretcher and another for his accompanying nurse.

This also is not the first time that Indian Club has taken up initiatives like this to help fellow citizens in the Kingdom. Amid the pandemic outbreak, the club distributed food kits and medical aids to the needy and organised several repatriation flights. The Club officials said had arranged five flights, including two Jumbo jets, to different Indian destinations including Calicut, Cochin, Bangalore and Hyderabad.

Second phase bookings are going on for flights to Delhi, Hyderabad, Mangalore, Kochi and Trivandrum. The Indian club President Stalin Joseph and General Secretary Job MJ thanked all who coordinated and supported this noble cause.

140 expats set to fly back under Vande Bharat mission