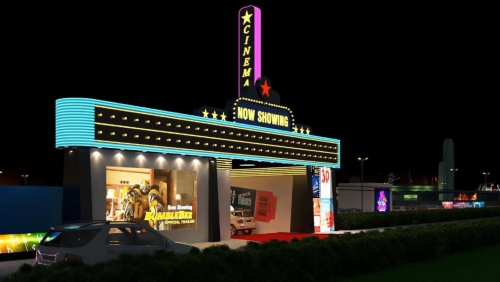 Mukta Cinemas will open doors to Bahrain’s first drive-in Cinema on July 20. Akshay Bajaj Chief Executive Officer of Mukta Cinema told Al Ayam in a statement. The project, he said, is being implemented in cooperation with Pico Exhibitions at Bahrain Bay. The facility with a single screen, Bajaj told Al Ayam, is capable of accommodating up to 100 cars.

The movie will broadcast sound using an FM frequency to which the viewers will have to tune in using their car radio. A lot of drive-ins use FM radio to deliver the movie sound these days. Experts, however, warn it would simply drain your car’s battery. So, it is better to bring a battery-powered portable radio or a boombox instead, in case you are not running your engine to use your car AC.

The Coordination Committee, headed by His Highness the Crown Prince, had earlier announced that drive-in cinemas would be allowed to operate following health requirements and the rules of social distancing, with the continued closure of cinemas.

The idea of drive-in cinemas first came to compensate for the closure of cinemas in line with the precautionary measures adopted in light of the COVID-19 pandemic. UAE is a front runner in this regard, with people there now enjoying drive-in at Dubai’s Mall of the Emirates.

A paralysed man’s dream to fly home just got realised