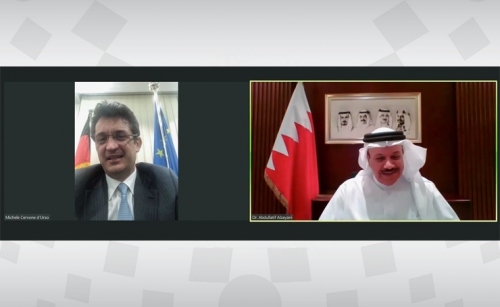 Minister of Foreign Affairs Dr. Abdullatif bin Rashid Al Zayani received a video call from European Union (EU) Mission head to Bahrain and the GCC Michele d’Urso. They discussed growing cooperation between the Kingdom and the EU and ways of bolstering relations between both sides to achieve common interests.

They also reviewed other issues of mutual concern. Meanwhile, the Foreign Minister received a letter of thanks from UK Foreign Affairs Secretary of State Dominic Raab, in which he expressed thanks and appreciation for the support given to British nationals in Bahrain during the coronavirus (COVID-19) pandemic.

The UK Foreign Affairs Secretary of State affirmed that the Kingdom’s assistance in facilitating repatriation flights for British nationals reflects close historic relations between the two countries. He also stressed the UK’s keenness to enhance joint cooperation and coordination with Bahrain to achieve common interests. He wished the King - dom’s government and people further progress and prosperity