MOI: 6,128 violations of the face mask rule | THE DAILY TRIBUNE | KINGDOM OF BAHRAIN 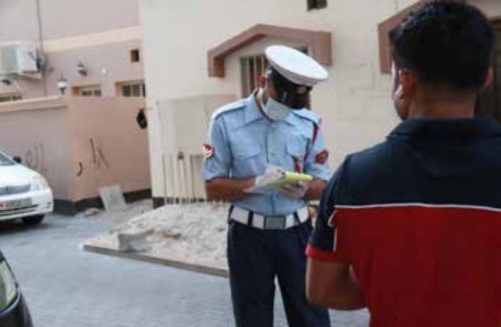 Ministry of Interior (MOI) Brigadier General Dr Shaikh Hamad bin Muhammad Al Khalifa, indicated that 6,128 violations have been registered against citizens and residents for not wearing face masks. Of these, the Police Directorate at the Northern Governorate recorded the most violations (2,000), followed by the capital governorate (1,265), the Muharraq Governorate (1,201), Southern Governorate (979), General Security’s operations department (611) and the General Administration of Ports Security (72).

Since the precautionary measures to prevent the spread of the coronavirus (COVID-19) were first implemented, violators have been caught at public places and commercial stores, announced the MOI on their official Twitter page yesterday.

The Brigadier General called on all citizens and residents to follow social distancing in public places, markets, shops and parks with a commitment to not gather in groups of more than five people. He also highlighted the need to adhere to wearing masks.

He appealed for their cooperation, reiterating the message conveyed through their awareness campaigns on the importance of commitment and support for the Kingdom’s efforts in tackling the spread of the pandemic.