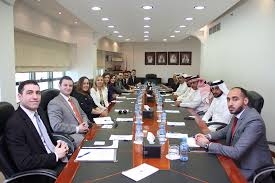 A US Congress delegation praised the pioneering role played by Bahrain in combating human trafficking and developing the work environment by applying international criterial to safeguard the rights of workers. This came during a meeting yesterday between Chief Executive of the Labour Market Regulatory Authority (LMRA) Ausamah Al Absi, the Head of the National Committee to Combat Trafficking in Persons (NCCTIP), and a delegation from the US Congress.

The meeting was held in the presence of representatives from the Ministry of Foreign Affairs. The American Congressmen underlined Bahrain’s good reputation in combating human trafficking and promoting labour rights.

They stressed the international reports in this respect, including Bahrain reaching Tier 1 status for two consecutive years in the US Department of State Trafficking in Persons Report. Mr Al Absi updated the US delegation about the reform project of the labour market and the executive steps taken to carry it out.

He stressed the keenness of the Kingdom to protect the work environment, affirming that respecting the individuals’ rights and ensuring equality between them is part of the social culture in Bahrain. Separately, the National Institution for Human Rights (NIHR)’s Secretary-General Yasser Ghanem Shaheen, received the delegation.

The secretary-general reviewed with them NIHR’s most important achievements in the past ten years, and its important role in dealing with issues related to human rights in accordance with the law. He stressed that all the achievements and successes would not have been accomplished without the support of HM the King to human rights institutions in the Kingdom.

The delegation was briefed on NIHR’s competencies and objectives and toured the training centre, library and the call and complaints centre.