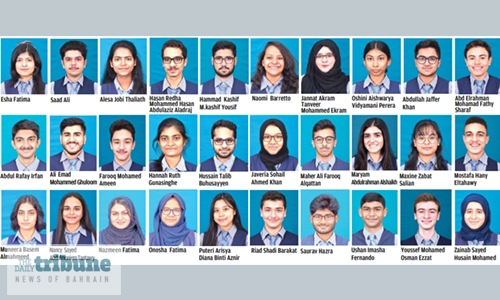 The Al Noor International School has once again fulfilled its promise to parents and extended its astonishing contribution to the academic excellence in the Kingdom of Bahrain by providing quality education in line with achieving the vision and mission of the School, and the Economic Vision 2030 of the Kingdom of Bahrain that aims at achieving the highest level of education for the citizens and residents of Bahrain.

In the Cambridge AS level Examinations 2019, the students of Al Noor International School demonstrated exceptional performance, with 126A and 76B grades. In A level, the performance of students is very high with 22A*, 49A and 85B grades. In a significant number of AS and A level subjects, the school’s averages, for students securing Grades between A* and B and between A* and C grades, are well above the respective world averages. In A Level, ESHA FATHIMA and SAAD ALI, secured A* in all subjects.

He thanked the Head Teachers, Coordinators and teachers of the school for the time and energy they devoted to the education of the students. Dr Muhammad Mashood the school Director congratulated the students for their hard work and achievement. These results demonstrate the positive impact that our focus on academic management and students’ performance has had.

We have a clear trend of improvement and look forward to seeing this continue in the future. The Principal, Mr Amin Mohammed Hulaiwah, praised the outstanding results obtained by the AS and A Level students and mentioned the school’s achievements during the course of the past academic year.