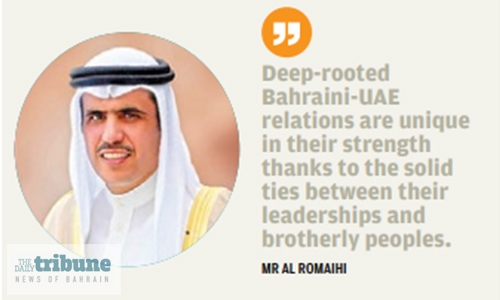 Information Affairs Minister and Board of Trustees Chairman of the Bahrain Institute for Political Development (BIPD), Ali Al Romaihi, has lauded the solid Bahraini-UAE relations, noting that they are a model in GCC unity and distinguished strategic partnership that is based on mutual love and respect, as well as on religion, history, kinship, common destiny and shared keenness on ensuring the security of the Arabian Gulf, consolidating Arab and Islamic solidarity and promoting the message of tolerance and peace in the region and the world.

The minister asserted that under the leadership of His Majesty King Hamad bin Isa Al Khalifa, Bahrain shares with sisterly UAE its celebrations of the 48th anniversary of its National Day, in recognition of the solid fraternal bilateral ties, and in line with its pride in the UAE’s landmark development and civilisational achievements since its beginning by Founder, the late Shaikh Zayed, and its continuity, under the leadership of President, HH Shaikh Khalifa bin Zayed Al Nahyan, and support of his government.

Mr Al Romaihi stressed that the deep-rooted Bahraini-UAE relations are unique in their strength thanks to the solid ties between their leaderships and brotherly peoples, shared distinguished human and civilisational values reflected in their adoption of a wise and moderate policy that supports regional and global security and peace, promotes peaceful co-existence among religions, cultures and civilisations and backs sisterly Saudi Arabia in its leadership of the Arab Coalition to combat terrorism, as well as support legitimacy and restore hope in Yemen.

The minister affirmed the Bahraini media’s keenness to share with the brotherly UAE citizens their celebration of their National Day, being a day of feast in every Bahraini and Arab house. He stressed that the Bahraini media is interested in highlighting the Bahraini-UAE exemplary long-standing relations, as well as their leading   status regarding their respect for human rights, human development, economic freedom, in addition to their consolidation of the knowledge-based society and digital economy, as proved by international organisations.

The Official 48th National Day Celebrations will be held on 2nd December, 2019, under the gracious patronage of His Highness Shaikh Khalifa bin Zayed Al Nahyan, President of the UAE at the Zayed Sports City Stadium in Abu Dhabi. The Organising Committee of the Official UAE National Day confirmed that the preparations for the celebration have been completed. The celebration will be centred around a spectacular theatrical production titled “Legacy of Our Ancestors”.

The show will be staged on a scale not previously seen in the UAE with more than 5,000 experts from 70 countries coming together to shape this unmissable production. The show will take the audience on a vivid journey of the UAE’s heritage through a series of stories that highlight values of courage, determination, generosity, and tolerance, which have been long embedded in the UAE’s national and social fabric and have been passed down through generations.

The epic scale of this production has been brought to life by the efforts of many dedicated individuals coming from diverse backgrounds and cultures, a true reflection of co-existence and tolerance which are key components of the UAE’s social inclusion, with more than 200 nationalities living in harmony. Showing the generous and welcoming Emirati identity, this year’s celebration will welcome 20,000 attendees, both citizens and residents, who will together express their love and pride for the UAE.