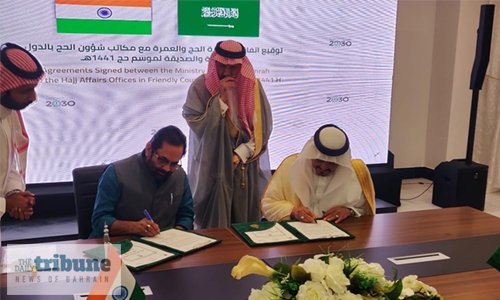 India has become the first country to make the entire Hajj process digital, Minority Affairs Minister Mukhtar Abbas Naqvi said yesterday. This came after the minister signed the bilateral agreement for the pilgrimage with the Saudi Hajj Minister in Jeddah.

An online application, e-visa, Hajj mobile app, “e-MASIHA” health facility, “e-luggage pre-tagging” providing all information in India itself regarding accommodation and transportation in Mecca-Madina will be provided to Indian Muslims going for the Hajj in 2020, he said.

Naqvi made the remarks after signing the bilateral annual Hajj 2020 agreement between India and Saudi Arabia with Hajj and Umrah Minister of Saudi Arabia Mohammad Saleh bin Taher Benten.

Naqvi said for the first time facilities were provided for digital pre-tagging of pilgrims’ baggage. Saudi Arabia had earlier increased India’s Hajj quota by 30,000, lifting the figure to 200,000 per year.

The enhanced quota means India will send the second-highest number of pilgrims for Hajj after Indonesia.