Equality at work | THE DAILY TRIBUNE | KINGDOM OF BAHRAIN 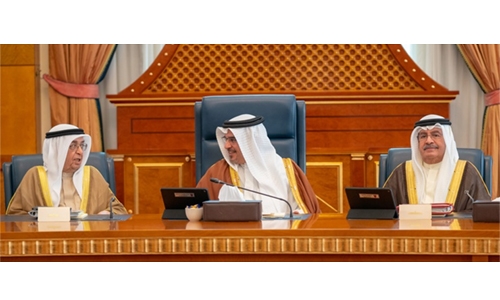 HRH the Crown Prince emphasised the importance of further supporting the efforts of the Supreme Council for Women, chaired by its President and wife of HM the King, HRH Princess Sabeeka bint Ibrahim Al Khalifa, in order to reinforce the advancement of Bahraini women in all fields.

In this regard, the Cabinet directed the Ministry of Finance and National Economy to co-ordinate with the Supreme Council for Women to implement measures and adopt necessary budgets to ensure continued women’s advancement and the provision of equal opportunities, in line with the memorandum submitted by the Minister of Finance and National Economy.

The Cabinet also approved the results of the 2017-2018 National Gender Balance Report. The report, recommended by the Government’s Executive Committee, chaired by HRH the Crown Prince, and prepared by the Supreme Council for Women, was presented by the Minister of Finance and National Economy.

The Cabinet directed the report be referred to the National Committee for Information and Population, and further directed for the establishment of a joint committee between the Supreme Council for Women, the Ministry of Finance and National Economy, and the Ministry of Cabinet Affairs to follow up on the implementation of the recommendations of the report, in co-operation with relevant authorities.

(48) of the year 2012, regarding the Bahrain Chamber of Commerce and Industry. The Cabinet reviewed the recommendations by the Ministerial Committee for Legal and Legislative Affairs, before deciding to postpone the memorandum to its next session for further review.

It approved a proposal submitted by the Supreme Council of Health to establish four committees. The four resolutions detailed in the proposal outline the establishment of the Higher Committee for Treatment Abroad, the National Committee for the Unified Procurement of Medicines and Medical Supplies, the Health Quality and Clinical Standards Committee, and the Health Strategic Training and Planning Committee.

The Cabinet directed the National Space Science Agency (NSSA), in collaboration and co-ordination with relevant authorities, to prepare a draft of the Kingdom’s National Space Law, in line with a memorandum submitted by the Minister of Transportation and Telecommunications.