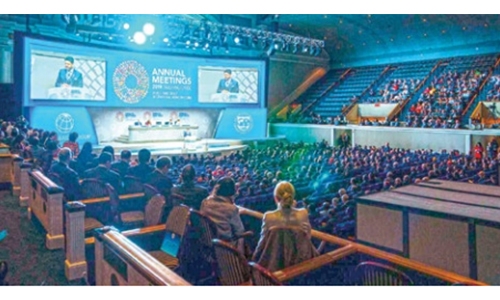 Minister of Finance and National Economy, Shaikh Salman bin Khalifa Al Khalifa stressed the importance accorded by Bahrain to investing in citizens in all its development projects. He underlined absolute belief that national competencies are the real assets of the kingdom, pointing out the outstanding status of Bahrain in international indices. He also underscored the Kingdom’s keenness to boost investments in all vital sectors to promote growth as well as economic and social sustainability in the development march spearheaded by His Majesty King Hamad bin Isa Al Khalifa.

The Minister of Finance and National Economy was speaking during his participation in the annual meeting of the World Bank Human Capital Project, on the sidelines of the Bahraini delegation’s participation in the meetings of the International Monetary Fund and the World Bank Group in Washington. The minister affirmed the Kingdom’s qualitative strides in the health and education sectors, being two pillars in the development and sustainability of active human resources.

He pointed out the initiatives adopted by Bahrain to stimulate investments in the health and educational sectors to boost economic growth and create jobs. He also stressed the Kingdom’s leading status in education, pointing out celebration of the centenary of regular education in Bahrain this year and the kingdom’s ongoing efforts to develop the sector. The Minister of Finance and National Economy pointed out the Kingdom’s health achievements and inauguration of many modern projects to optimise services and maintain Bahrain’s outstanding status in human development indices.

He also asserted the care given by the Kingdom to women empowerment, pointing out the efforts of the Supreme Council for Women (SCW) in this respect. Separately, the minister participated in the World Bank Human Capital Project meeting in Washington DC, as part of the Annual Meetings of the Boards of Governors of the World Bank Group (WBG) and the International Monetary Fund (IMF). During the session, Shaikh Salman highlighted Bahrain’s unique value proposition within the region, based on human capital, robust and dynamic regulation, and regional connectivity.

Shaikh Salman stressed that Bahrain has placed human capital at the heart of national development efforts for decades, emphasising Bahrain’s high rankings in this respect, in addition to its commitment to accelerating sustainable socio-economic development. He noted that Bahrain was the first country in the Gulf region to establish formal schooling a hundred years ago and how Bahrain provides a health service system that supports social and economic development.  In this regard, he added that these are key pillars to grow and sustain effective human capital and drive economic growth.

The Minister of Finance and National Economy explained that the Kingdom is one of the leading countries in education and continues to develop the education sector to contribute to achieving outcomes based on creativity, innovation and the development of national cadres. He also pointed out that the results achieved in the health sector were the result of a series of innovative and ground-breaking projects to improve public health, which contributed to maintaining the Kingdom of Bahrain’s distinguished position in global human development indicators.

The minister underscored Bahrain’s commitment to women’s advancement, underlining the central role the Supreme Council for Women plays in furthering women’s advancement alongside other inter-governmental authorities and reinforcing the contribution of women to the Kingdom’s national development.