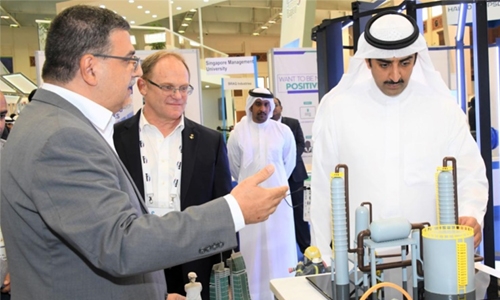 The minister praised the efforts exerted by the organisers in showcasing distinct industrial initiatives, which was foremost the corner of creativity. He visited the creative initiatives of companies from different countries of the world, as they gave a full explanation of their creative projects, which were characterised by innovation and exchange of parties for dialogue and discussion in the various projects aimed at developing their products and emphasising the values added to them.

Shaikh Mohammed bin Khalifa expressed his admiration for the displayed creativities, stressing the importance of supporting and encouraging such energies, ideas, innovations. He added that supporting emerging industries will contribute to enhance investment in Bahrain, and will develop the oil sector in general.

The global event is being attended by a group of speakers, dignitaries, CEOs, decision makers, technicians, engineers, academics, local, regional and international universities with the aim of exchanging knowledge, experiences, best practices and modern technologies in order to maintain its competitiveness in the global markets and attracting qualified human resources with experiences able to innovate and develop the future of operations engineering.