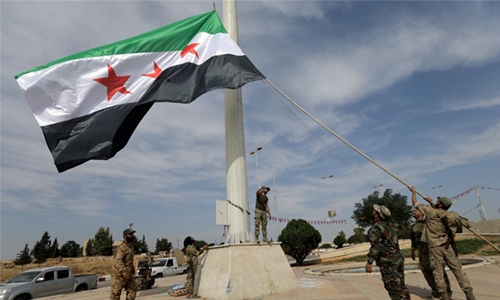 Turkey ignored US sanctions and pressed on with its assault on northern Syria yesterday, while the Russia-backed Syrian army roared into one of the most hotly contested cities abandoned by US forces in Donald Trump’s retreat.

Reuters journalists accompanied Syrian government forces who entered the centre of the city of Manbij, a flashpoint where US troops had previously conducted joint patrols with Turkey. Russian and Syrian flags were flying from a building on the city outskirts, and from a convoy of military vehicles. US forces announced they had pulled out of the city.

A week after reversing US policy and moving troops out of the way to allow Turkey to attack Washington’s Syrian allies, Trump announced a package of sanctions to punish Ankara. Trump’s unexpected decision to withhold protection from Syria’s Kurds after a phone call with Turkish President Tayyip Erdogan a week ago swiftly upended five years of US policy in the Middle East.