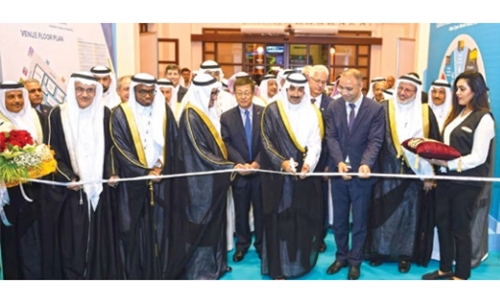 The expo is being organised by Middle East Energy Events in co-operation with the American Institute of Chemical Engineers and in co-ordination with the National Oil and Gas Authority (NOGA) and with the support of local, national and international companies.

This global event will be attended by a group of speakers, dignitaries, CEOs, decision makers, technicians, engineers, academics, local, regional and international universities with the aim of exchanging knowledge, experiences, best practices and modern technologies in order to maintain its competitiveness in the global markets and attracting qualified human resources with experiences able to innovate and develop the future of operations engineering.

In his opening speech, the Minister of Oil congratulated HRH Prince Salman bin Hamad Al Khalifa, the Crown Prince, Deputy Supreme Commander and First Deputy Prime Minister on the success of the Government Forum 2019 and the visions included in this initiative development that reflects HRH constant support to achieve the best government services, in line with Bahrain’s Economic Vision 2030, within the overall development process of the Kingdom.

The minister said that the directions favoured by HRH the Crown Prince, and which stem from the high directive of HM King Hamad bin Isa Al Khalifa, to give the highest priority to oil exploration operations to increase Bahrain’s resources, and from these guidance. He stressed that NOGA continues to draw up plans and strategies to employ modern and advanced technologies in the oil and gas sectors.

He pointed out that NOGA has launched a number of vital projects such as the new replacement of the oil pipeline linking the Kingdom of Bahrain and the Kingdom of Saudi Arabia, and the third gas plant of Bahrain National Gas Company (Banagas), which is one of the largest industrial projects in the company’s history, where the actual operation of the plant began in November 2018 with Bahraini national expertise with a high degree of efficiency. The Minister of Oil added that NOGA is always seeking to strengthen the relations with various international oil companies in order to exchange knowledge and experiences and see the latest technologies and studies and research in this vital field.

He stressed that there were a number of exploration and production agreements that have been signed with a number of international oil companies such as the Italian Oil and Gas Extraction Company, and Eni in the North Sea Province No 1 as well as a memorandum of understanding with Total France Company, Baker Hughes and other international companies from the United States of America, Italy, France and various countries of the world.

He said that the theme of this year’s conference would meet the desire of participants from different countries of the world, which is expected to reach more than 3,000. “That emphasises the need for more engineering solutions for various challenges in the field of operations engineering as a result of the growth of population and the growing demand for energy, which requires increased work to strengthen cooperation between process engineering and technology.”

Shaikh Mohammed expressed his great thanks and gratitude to the leadership for the support by the oil and gas sector in the Kingdom of Bahrain, which has yielded positive results in ensuring the sustainability of its economic growth. Over 150 exhibitors are taking part in the expo, covers an area over 8,000 square-metres.