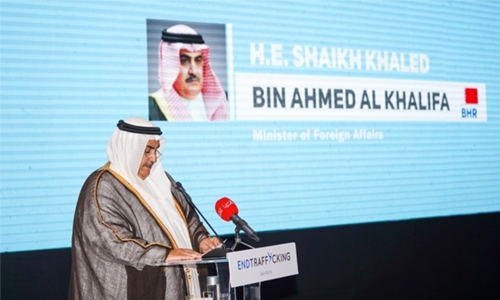 Minister of Foreign Affairs, Shaikh Khalid bin Ahmed bin Mohammed Al Khalifa, inaugurated the Government Forum to Combat Trafficking in Persons in the Middle East, organised by the National Committee to Combat Trafficking in Persons and the Labor Market Regulatory Authority (LMRA), in co-operation with the International Organisation for Migration and the United Nations Office on Drugs and Crime (UNDOC) in the GCC. The forum will run until October 16th.

The Minister delivered a speech in which he stressed the Kingdom’s keenness to protect human dignity in line with the directives of His Majesty King Hamad bin Isa Al Khalifa to respect the values of peaceful coexistence and mutual respect. He noted that the government, led by His Royal Highness the Prime Minister, Prince Khalifa bin Salman Al Khalifa, with the support of His Royal Highness the Crown Prince, Deputy Supreme Commander and First Deputy Prime Minister, Prince Salman bin Hamad Al Khalifa, has efficiently implemented His Majesty’s directives, enabling the Kingdom to be one of the leading countries in the field of trafficking in persons.

In this regard, he noted that the Kingdom maintained its Tier 1 status in the US State Department’s 2019 Trafficking in Persons (TIP) report, being the first country in the MENA region to achieve such rank.  He highlighted the programs and initiatives implemented by the Kingdom of Bahrain in the field of trafficking in persons, including the National Referral Program, the Victims of Trafficking in Persons Shelter, and the Flexible Permit.

In addition, the Kingdom will host the Regional Training Centre on Combating Trafficking in Persons, to be launched in partnership with the UNDOC in the GCC.  The minister expressed his thanks to the CEO of the Labour Market Regulatory Authority (LMRA) and Chairman of the NCCTIPs, Ausamah Alabsi, for his continued efforts in this field. He also wished the forum success in finding solutions to combat trafficking in persons, and put forward initiatives that contribute to supporting victims and reintegrating them in the society.