‘Bahrain, US working together to ensure networks are more secure, faster’ | THE DAILY TRIBUNE | KINGDOM OF BAHRAIN 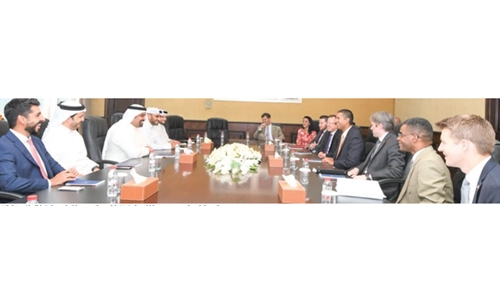 Chairman of the United States Federal Communications Commission (FCC) Ajit Pai has hailed the success of his meetings in the Kingdom. “We shared the views of FCC and other government agencies on some of the issues with respect to 5G, the next generation of the wireless kind of activity, one aspect of which is the security of those networks,” Pai told Bahrain News Agency (BNA) yesterday. According to the FCC position, 5G will promote tremendous benefits for consumers and businesses around our country and across the world, he said.

Mr Pai said the 5G has a very fast speed and is “100 times faster than 4G”. “A huge amount of data can be pushed through the airwaves wirelessly, so we think of the applications that will be developed based on this 5G platform. It will transform entire industries like healthcare, education, agriculture and transportation,” he said. “We are in the dawn of this age but we are confident that there will be tremendous benefits.

Just as we saw the mobile app economy developed from the 4G platform, 5G will promote a lot more innovation and investment for the consumers around the world.” Mr Pai said that it was difficult to say how long the 5G would last. “We are announcing some of 5G commercial deployments in the United States, and I know that also Bahrain is exploring new commercial deployments, but we are already seeing some hints of the promising future to come. In terms of transportation for example, car makers are working with wireless innovators to come up with a connected car solutions that will make transportation more efficient, reduce pollution and mitigate the number of car accidents that are happening,” he said.

“We are announcing healthcare at least in the US. Patients would have wireless sensors that would remotely track, so instead of having the patient coming to the hospital when there is an emergency, he or she would be monitored remotely and healthcare providers could intervene before something becomes an emergency.” Mr Pai said that the US government pays a very high attention to these networks not only to be strong but also to be secure.

“At the end of the day, 5G involves the creation of lots of data, a lot of new devices aside of phones, refrigerators, cars and all kinds of things that we connect to the Internet,” he said. “The generation of that data has to be protected and one of the issues we have been thinking about is how to ensure the security of these networks in the US and around the world. One of the things we have been encouraging our allies like Bahrain to think about is a risk base frame.

It is impossible to eliminate risks in most cases, but we can have a regulatory work frame base that allows you to have the network services secured and that is something really important to us.” The FCC chairman, who stressed that Bahrain is a close ally to the US, said that Bahrain officials share the US priority to make sure that those networks are secure both from national security perspective and consumer perspective.

“They appear to have taken steps to make sure that the networks are secured. It is an issue that officials have to confront, but we are confident that we are working together and making sure that this value is upheld,” he said.