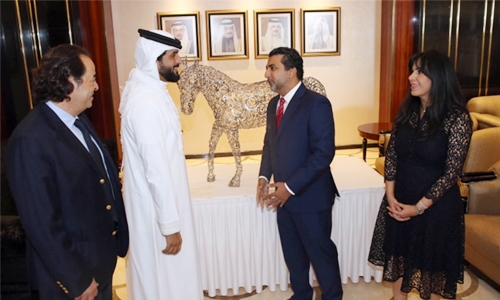 Representative of His Majesty the King for Charity Work and Youth Affairs and Chairman of the Supreme Council for Youth and Sports His Highness Shaikh Nasser bin Hamad Al Khalifa received a commemorative gift from Qutub Dadabhai, Young Presidents Organisation MENA Chair, in recognition of his outstanding role in supporting the youth and sport sector, charity work and humanitarian initiatives.

HH Shaikh Nasser affirmed his unflinching support to the youth and initiatives aimed at boosting investment and serving the national economy. The YPO Chief Executive thanked HH Shaikh Nasser for his unwavering keenness to support the youth and sport sector and the initiatives aimed at developing human resources and tapping on the youngsters’ potentials.

The commemorative gift is a horse statue designed by Sonal Ambani, which symbolises “time passing as a force that can never be stopped but only be directed”.