US minesweepers in Gulf unreliable! | THE DAILY TRIBUNE | KINGDOM OF BAHRAIN 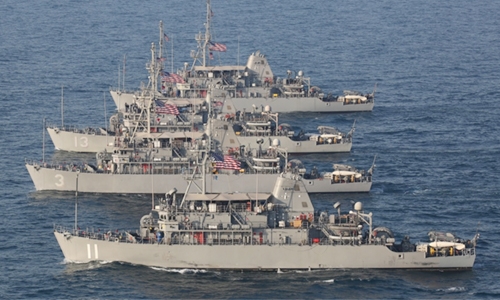 As the United States is scrambling to create a maritime task force in the Gulf with its allies, sailors in the Bahrain-based 5th fleet have revealed that they are struggling to identify and defuse underwater mines with ‘unreliable’ and ageing minesweepers.  “We are essentially the ships that the Navy forgot,” Stripes. com quoted a US Navy officer as saying.

Another officer stationed on one of the minesweepers in the Arabian Gulf told Stripes, “The four minesweepers based in the Gulf were so physically unreliable that he doubted his superiors would actually send them into action in a crisis.” Washington and Riyadh previously blamed Iran for allegedly using limpet mines to blow holes in Gulf-area ships in May and June, and Trump came close to ordering an attack on Iran in retaliation. However, the report points out that the ships currently on duty here are ageing with “companies that used to make a variety of spare parts no longer exist.”

“A sailor recently aboard one ship said the sonar meant to detect mines was so imprecise that in training exercises it flagged dishwashers, crab traps and cars on the ocean floor as potential bombs,” the report said.  The report says that even though clearing mines would require multiple ships, the Navy is struggling to put a “fully mission-capable” squad to sea. “We are eager to operate if called upon,” the officer aboard one of the ships told Stripes.

“We’ll operate the systems as best as they can operate. My concern is the ships are old and, like any old ship, they break.” The Avenger-class ships were built in the late 1980s and early ’90s and slated for retirement years ago. But their retirement date has been continually delayed because the service still doesn’t have a working replacement. The Navy’s latest estimate is that the ships will all be decommissioned by the fiscal year 2023. The mine warfare fleet in the Arabian Gulf, according to Stripes, is a mix of ageing ships, high-tech drones and helicopters.

A Navy spokesman, however, conceded “there are challenges with all older ships, including maintenance and repair” that might make it take longer for the ships to accomplish their mission, he said maintenance problems have “dramatically improved” of late. He noted that as recently as July 6, all four of the older minesweepers based in the Gulf had been at sea at the same time.

One of the reasons, according to ProPublica, an American nonprofit organisation based in New York City, that kept the mine warfare fleet in this state is budget constraints.  “It’s not that they don’t want it, it’s that they want other things more,” one officer said. “Every dollar you’re spending on [mine countermeasures] is a dollar you’re not spending on some cool new submarine.”

The high rate of mechanical issues has also been cited as a reason. The USS Devastator, or MCM 6, was out of commission because the Navy couldn’t fix a key part, Stripes quoted a sailor who recently served a long tour on the ship.

Don’t know how to use

Stripes also points out that sailors on the ships often do not know how to use their equipment as they have relied too heavily on computer-based training.  “I’m telling you they can’t do it, not with any degree of operational proficiency,” a contractor told the report.

All this comes at a time when Iran has stepped up its activities in the strait by planting thousands of naval mines. In an incident, limpet mines were placed above the water level on the hull of the Japanese-owned Kokuka Courageous as it was passing through the Gulf of Oman along with the Norwegian-operated Front Altair, according to the US Navy.

Stripes also noted that Iran’s arsenal includes a mix of cheaper, older ones that float and blow upon impact, and more sophisticated ones that can be dropped from planes. They sit on the ocean floor and explode after detecting nearby ships. Sailors, according to stripes, in the 5th fleet are eager to contribute watching the recent escalation, but doubt their ability to do so.

Asked if the ships could effectively find and remove mines in the Gulf if they had to, one officer was blunt: “No.” The Bahrain-based minesweepers, more than two times the length of a basketball court, are made of wood so they can more safely approach magnetic naval mines.

Sailors have to be cautious about bringing anything made of metal on board, mindful even of where they store canned foods. The Navy, report claims, is planning to introduce a new class of vessels, known as Littoral Combat Ships, but repeatedly delayed by cost overruns and technical deficiencies.

The Navy, in the shipbuilding plan it submitted to Congress this year, said that in the next year it would begin retiring three of its 11 minesweepers — the ones based in the US, in San Diego — and harvest their parts to service the eight ships based in Japan and Bahrain.