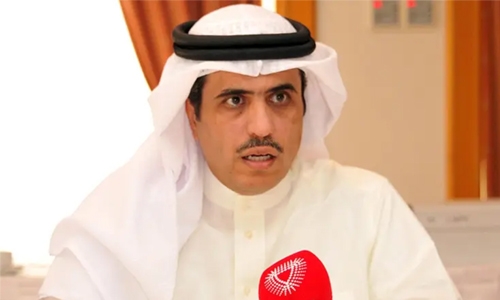 Information Minister and member of the Supreme Council for Youth and Sports (SCYS) Ali Al Romaihi asserted Bahrain’s pride in the achievements of Bahraini youth. He stressed the Kingdom’s keenness to boost their professional and scientific capabilities, being the pillar of the comprehensive reform and development march in the prosperous era of His Majesty King Hamad bin Isa Al Khalifa.

The Information Minister was speaking during a visit to the 10th edition of “the Youth City 2030” at Bahrain International Exhibition and Convention Centre, in the presence of Minister of Youth and Sport Affairs Ayman Al Moayed.

He praised the efforts and pioneering initiatives of Representative of His Majesty the King for Charity Work and Youth Affairs and SCYS Chairman His Highness Shaikh Nasser bin Hamad Al Khalifa in patronising such quality programmes aimed at empowering the youth locally and internationally.

Mr Al Romaihi lauded participation of the Information Ministry and Bahrain Institute for Political Development in “the Youth City 2030”, which is organised by the Ministry of Youth and Sport Affairs in co-operation with Tamkeen.