; A day of pride | THE DAILY TRIBUNE | KINGDOM OF BAHRAIN 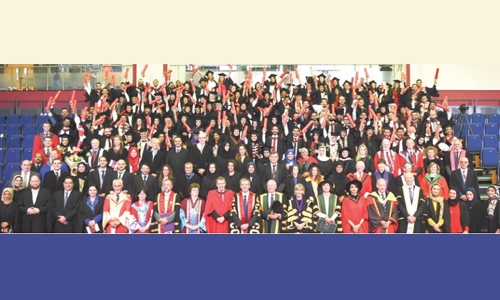 A day of pride

The Royal College of Surgeons in Ireland – Medical University of Bahrain (RCSI Bahrain) yesterday celebrated the biggest day in its calendar as it played host to the tenth annual Conferring Ceremony at its Busaiteen campus. Their biggest-ever medicine cohort of 134, along with 85 graduates from the undergraduate and postgraduate nursing were honoured during the event, which took place under the patronage of His Royal Highness Prince Khalifa bin Salman Al Khalifa, Prime Minister of the Kingdom of Bahrain.

Over 1,000 guests attended the campus across the two ceremonies, including staff, stakeholders, dignitaries, students’ family members and senior representatives of RCSI in Dublin and RCSI Bahrain The morning’s ceremony was attended by His Highness Shaikh Salman Bin Khalifa Al Khalifa, Advisor to His Royal Highness Prince Khalifa bin Salman Al Khalifa, Prime Minister of the Kingdom of Bahrain, as representative of His Royal Highness the Prime Minister.

The afternoon ceremony was attended by, Faeqa Al Saleh, the Minister of Health of the Kingdom of Bahrain and representative of the His Royal Highness Prince Khalifa bin Salman Al Khalifa, Prime Minister of the Kingdom of Bahrain, patron of the ceremony. National University of Ireland (NUI) Registrar, Dr Attracta Halpin, and President of Royal College of Physicians in Ireland (RCPI), Professor Mary Horgan were also among the guests in addition to the Chancellor of National University of Ireland (NUI), Dr Maurice Manning, who addressed the guests and highlighted the ongoing collaboration and partnership between Bahrain and Ireland specifically in the higher education field.

RCSI President, Mr Kenneth Mealy was in attendance to present the degrees, alongside RCSI Bahrain President, Professor Sameer Otoom. Mr Mealy congratulated the graduates on their achievements to date and praised the ongoing relationship between RCSI and Bahrain. Professor Otoom meanwhile, took the opportunity to congratulate the graduates and extended sincere gratitude to the friends and family members who had supported them in their achievements. It was a particularly special day for multiple award-winning graduate and class valedictorian, Dr Maryam Jameel Naser, who won the Degree Award Gold Medal, the Medicine Overall Gold Medal, the James Finucane Prize in Medicine, the Niall O’Higgins Prize in Surgery, in addition to the silver Senior Cycle Medal for Academic Years 2017/18 and 2018/19.

RCSI Bahrain is a constituent university of RCSI, which was established in Dublin, Ireland in 1784. Licensed as an independent private university, RCSI Bahrain is a not-for-profit health sciences institution focused on education and research to drive positive change in all areas of human health worldwide. Since hosting its first Conferring Ceremony back in 2010, RCSI Bahrain has produced more than 2,000 graduates in medicine, nursing and postgraduate studies who are now working in 26 countries across the world.

‘Toy Story 4’ lowers the stakes and ramps up the whimsy