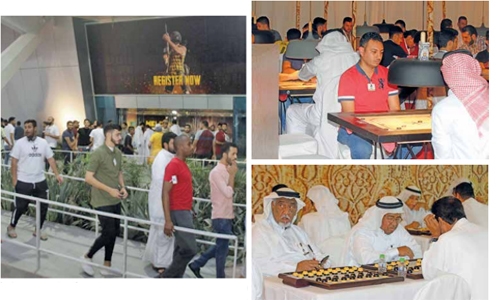 The first Nasser bin Hamad Ramadan Heritage Festival has witnessed a massive turnout during the first 10 days.  According to the organising committee, a total of 10,000 people took part in the festival, with half of them being participants of the heritage and electronic games.

Held upon directives from the Representative of HM the King for Charity Work and Youth Affairs and Chairman of the Supreme Council for Youth and Sports, HH Shaikh Nasser bin Hamad Al Khalifa, the festival is organised by the Bahrain Olympic Committee (BOC)’s Heritage Sports Committee.  The first edition of the “Nasser bin Hamad Ramadan Heritage Festival” features an array of heritage and electronic games.

“The high visitor turnout reflects the outstanding success of the event in attracting Bahraini youth to the games, especially PUBG whose winner will receive a cash prize of BD5000,” the organisers said.  Visitors win daily cash prizes in addition to travel tickets.  Competitions in the preliminary rounds have ended in some of the games. Individuals and teams are preparing for the final rounds of the festival with total prizes worth $ 200,000.