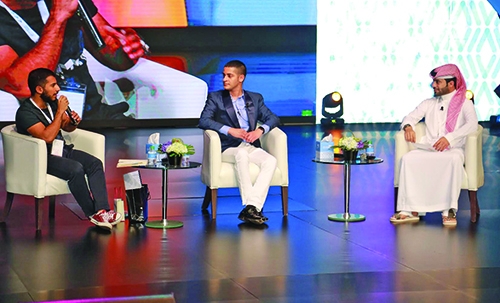 The event is being held at Shaikh Abdulaziz bin Mohammed Al Khalifa Hall in the University of Bahrain and will continue for the next two days. It’s organised by Youth and Sports Affairs Ministry, under the patronage of His Majesty the King’s Representative for Charity Works and Youth Affairs, Supreme Council for Youth and Sports Chairman and Bahrain Olympic Committee President HH Shaikh Nasser bin Hamad Al Khalifa.

The day consisted of three sessions, where speakers shared with the audience their success/failure experiments.

The American Guinness world record holder shared with the audience how he was able to overcome a devastating incident that could’ve cost him his life.

Huston was involved in an offshore accident when he was young. His leg was stuck in the turbine of a boat’s engine while surfing. He described how he survived the lethal accident, from the moment he was in the water, until his right leg was amputated from knee down at a local hospital. Huston said his determination to overcome this challenge allowed him to discover his true abilities and place him among the stars.

Huston travelled for over 54,000 miles across 50 states to climb the highest points in the United States, using only one leg. He shared his documented experiences with the attendees at the conference.

The second session hosted Kuwaiti and Canadian young Authors Yousif Al Hajeri and Chaker Khazaal. It discussed “Reading in the era of technology”.

During the open talk session, Khazaal said, “I was rejected by many publishers at the beginning of my short career because of my young age (22 years). But once I uploaded my book online, I was recognised and contacted by many publishers. Technology has benefited the writing and reading industries.”

Khazaal also spoke about how failure and pain were a motive for him to write. He said the situations of distressed children in Palestine and Syria and other parts of the world are pushing him to write more and reveal the truth to the world.

During the session, Al Hajeri hosted a UoB student who has the potential to be a writer and spoke about her experiment in writing her first book.

The final session included an exceptional speaker, David E. Garcia. The session which was titled “Positive Thinking Towards Better Solutions” was a mixture of valuable information, experiences and laughter. The author of Find Your Genius book spoke about how he broke out of his fear when he decided to leave his hometown Texas and make a courageous trip to Paris, France.

David added, “I didn’t taste success until I defeated my fears and the surrounding negative environment that I was limiting myself in.”

“Coming for the first time to Bahrain, I’m happy that I get to speak to an auditorium full of geniuses,” he said.

Pointing to the initiative of Shaikh Nasser, David said, “Coming here and knowing that this activity is government-supported is just amazing. There is no government in the world that helps students by gathering them in an auditorium and providing them with international speakers who talk to them about success.”

Director of Youth Affairs in the Ministry of Youth and Sports Affairs Eman Janahi presented a token of appreciation to David at the end of the day.