Set up a body led by India PM Modi, Pope Francis and UN chief to end all wars: Mexico President | THE DAILY TRIBUNE | KINGDOM OF BAHRAIN 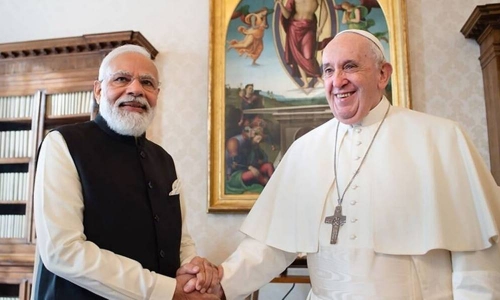 The UN will be asked to approve the creation of a commission that will include Indian Prime Minister Narendra Modi, Pope Francis, and UN Secretary-General Antonio Guterres. The commission's goal will be to prevent war and seek at least a five-year armistice to ensure global peace, according to Mexican President Andres Manuel Lopez Obrador.

At a press conference on Monday, Obrador expressed his hope that the governments of the three major world powers—Russia, China, and the United States—would pay attention to him and embrace the type of mediation he was offering.

He suggested that the panel be made up of Pope Francis, Indian Prime Minister Modi, and UN Secretary-General Guterres. The commission would convene and provide a plan to end all wars shortly.

Through this, the aim will be to stop war everywhere and reach an agreement to seek a truce of at least five years so that the governments of the entire world dedicate themselves to supporting their people, especially those who are suffering the most from the current situation.

He claimed that by taking such action, there would be five years of peace, no tension, and no violence.

He also declared that he agreed with the UN Secretary-General when he suggested that nations must forgo military conflict in favour of diplomacy and non-violent conflict resolution.

The president of Mexico stated that it is obvious that innocent lives are being lost and that everyone must work toward bringing about peace.