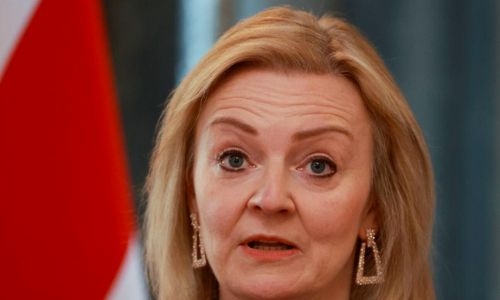 On Monday, British Conservative frontrunner Liz Truss won another heavyweight endorsement, as Tory members began a month of voting to decide the next occupant of 10 Downing Street.

Truss' attendance of Sunday's final against Germany— the first victory by any England football team in a major tournament since 1966— wiped Sunak's long-term tax slashing plan off all the front pages of local news media, except The Daily Telegraph.

The Conservative party contenders are going head to head later on Monday in a members' hustings, which will take place in the southwestern city of Exeter— the second of 12 such events, before the winner is announced on September 5.

Sunak, a polished debater, needs to recapture momentum after Truss steamed into a strong polling lead on a platform of immediate tax cuts, to address Britain's worst cost-of-living crisis in generations.

Chancellor of the Exchequer Nadhim Zahawi joined other luminaries of Boris Johnson's cabinet in backing the Foreign Secretary against Sunak, his predecessor in the Treasury.

"Liz understands that the status quo isn't an option in times of crisis," Zahawi wrote in the Telegraph, attacking Sunak's plan to prioritise fighting inflation now, before cutting taxes later.

"We need a 'booster' attitude to the economy, not a 'doomster' one, in order to address cost-of-living woes and the challenges on the world stage," the new Chancellor added.

Sunak's resignation from the scandal-tainted Johnson's cabinet had helped spark a ministerial exodus that forced the prime minister out last month.

As they began receiving postal and online ballot forms, a large chunk of the roughly 200,000 Tory members were said (by pollsters) to be nursing a grievance against Sunak— one shared by Johnson. The prime minister is not formally taking sides, but has told aides that he intends to give his successor some words of advice, "whoever she may be", the Sunday Times reported.

Bahrainis affected by recent heavy rains to be compensated