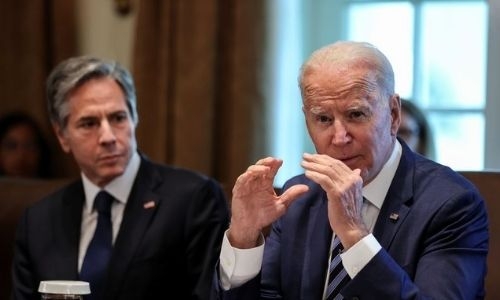 Russia said yesterday it had so far banned 963 Americans from entering the country - including previously announced moves against President Joe Biden and other top officials - and would continue to retaliate against what it called hostile US actions.

The largely symbolic travel bans form part of a downward spiral in Russia's relations with the West since its Feb. 24 invasion of Ukraine, which prompted Washington and its allies to impose drastic sanctions on Moscow and step up arms supplies to Ukraine.

Separately, the Foreign Ministry said it had added 26 new names to a list of Canadians it has barred from travelling to Russia, including defence chiefs, defence industry executives and Sophie Gregoire Trudeau, the wife of Prime Minister Justin Trudeau.

Publishing the full list of banned Americans for the first time, the ministry said: "We emphasise that the hostile actions taken by Washington, which boomerang against the United States itself, will continue to receive a proper rebuff."