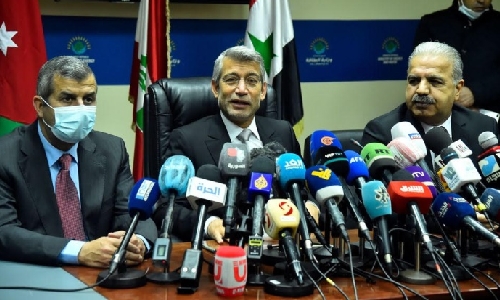 The energy ministers of Lebanon, Jordan and Syria signed an agreement governing electricity supplies in the region on Wednesday, in a move aimed at alleviating Lebanon's severe power shortage.

Lebanon is to receive electricity from Jordan, which is, in turn, to be supplied by war-torn Syria despite US sanctions on Damascus, Deutsche press agency (dpa) reported.

According to energy expert Marc Ayoub, the deal will provide Lebanon with two additional hours of electricity per day, though this is unlikely to be immediate.

"It will not be before April-May," Ayoub told dpa.

Lebanon has been suffering from a severe economic crisis for over two years, which has further worsened the country's already totally insufficient electricity supply.

Many people in the country have electricity for only one or two hours a day, and due to increased oil prices, the use of private generators is beyond the means of most people.

The Jordanian Minister for Energy and Mineral Resources, Saleh Kharabsheh, said in a statement last week that under the agreement, Lebanon would receive an extra 150 megawatts of electricity from midnight to 6 am, and an additional 250 megawatts during the rest of the day.

Gas supplies from Egypt are also being discussed.

Electricity and gas imports have to transit Syria, which is subject to international sanctions. However, the US government has made it clear that it would not raise any objections to energy imports made via Lebanon's war-torn neighbour.

The Syrian government views the new agreement as a possible step towards ending its regional and international isolation.

The deal is receiving financing from the World Bank, which has also demanded far-reaching reform of the Lebanese electricity sector. The country's energy supply has been neglected for years and suffers from endemic corruption, according to analysts.