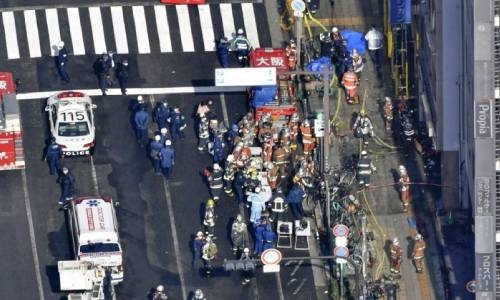 Twenty-seven people were feared dead after a fire broke out in a building in Osaka in western Japan, fire department officials said Friday, and police were investigating arson as a possible cause, reports AP.

The fire started on the fourth floor of an eight-story building in the shopping and entertainment area of Kitashinchi, Osaka city fire department official Akira Kishimoto said.

Twenty-eight people were affected, 27 of whom were found in a state of cardiac arrest, Kishimoto said.

All of them have since been taken to nearby hospitals.

Four people have been pronounced dead, NHK national television and other media reported, but Japanese authorities declined to confirm.

The building houses an internal medicine clinic, an English language school and other businesses. Many of the victims are believed to be visitors at the clinic on the fourth floor, fire department officials said.

The cause of the fire and other details were not immediately known.

Osaka police said they were investigating to determine whether the fire was caused by arson or an accident.

Witnesses saw a man carrying a paper bag from which an unidentified liquid was dripping and police were looking for the man, according to media reports, which police declined to confirm.

People on other floors of the building were believed to have been safely evacuated, Kishimoto said.

NHK footage showed dozens of fire engines and police vehicles on the street near the building, with onlookers watching the development from across the street.

NHK quoted a witness saying she heard a woman’s voice coming from the fourth floor asking for help.

Another witness told TV Asahi he saw orange flames and gray smoke coming out of windows on the fourth floor of the building when he stepped outside after hearing a commotion.

Another bystander told TBS television that a number of people taken out of the building were covered with blue tarps and seemed lifeless. He said he saw one woman who was alive being rescued through a window.

In all, 70 fire engines were mobilized to fight the fire, which was mostly extinguished within about 30 minutes of an emergency call, officials said.