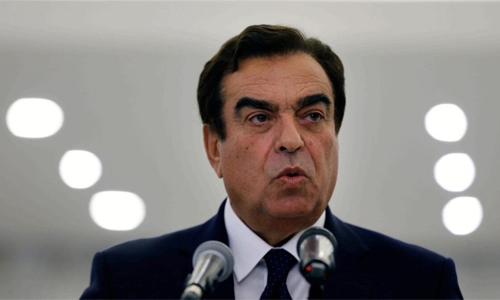 Lebanese Information Minister George Kordahi is expected to announce his resignation today to pave the way for a possible resolution of a diplomatic spat between Lebanon and Saudi Arabia sparked by comments he made, sources said on Thursday.

The sources said Kordahi’s resignation aimed to open the door for negotiations by French President Emmanuel Macron to resolve the dispute during a planned visit to Saudi Arabia this weekend.

Critical comments by Kordahi on the Saudi-led war in Yemen led Saudi Arabia in late October to expel Lebanon’s envoy to the kingdom, recall its ambassador and ban all imports from Lebanon, dealing a new blow to the country’s ailing economy.

Other Gulf states that are historical allies of Lebanon, including the UAE and Kuwait, took similar punitive diplomatic measures.

Saudi Arabia’s foreign minister said last month that the kingdom’s decision to cut ties was driven by Iran-backed Hezbollah’s growing grip on Lebanon and that dealing with Lebanon’s Hezbollah-backed government “is not productive and not helpful”.

Hezbollah had backed Kordahi’s decision not to resign, saying that Riyadh had contrived the crisis and Lebanon should not bow to foreign dictates.